Loon Census 2022, watching hummingbirds, bears and deer from the porch –

A little rain allowed my garden to grow and make the flowers bloom. My bee balm came out, giving hummers a new place to eat in the front and back yards. Karen and I sat on the porch
yesterday (July 17) and the hummer feeders have been a hive of activity all afternoon. In the morning, a mother bear came with two of last year’s cubs to check the bird feeders. The mother and a cub bypassed the electric fence. The other little one got confused as to where the others went. He tried to cross the fence, but fired and backed off. Then he circled around looking for mom and hit the fence again. He left in a hurry that time and probably won’t try again.

A few minutes later, there was a doe with twin fawns nursing together in front of the house. It would have made for a great shot since they were in direct sunlight, but the camera was in the truck. Many birds bring their young to feeders for a snack. Several Blue Jays with youngsters come every day. I set the Potter traps yesterday and caught five of the youngsters. I also caught an older Jay that I had banded as a juvenile in July 2014 which made this bird 8 years and two months old. This is one of the oldest reviews I’ve had from a Jay. They usually eat and run never to be seen again, but not this one. I also caught juvenile Slate Juncos that still had pin feathers on them.

The Loon Count took place on Saturday (July 16) from 8:00-9:00 on a lake of your choice or on a lake that no one else did. On some large lakes, such as Lac Raquette, they have several observers on different parts of the lake. At the Adirondack League Club, several people also go to different club lakes and ponds to check for loons and chicks. I do three inland lakes and a pond in the Moose River area. This year I reduced the number of Mitchell Ponds, which I had done in previous years. It takes me a little longer than the estimated time, but no one else can see these lakes that day and most birds don’t move around much when in the territory.

I cycled through Little Indian Lake early that day and arrived just before 8am, stopping at Muskrat Pond on the way. Normally I only see a family of ringneck ducks or hooded mergansers on the pond, but not on Saturdays. , because there was a big loon fishing there. It was only the second time I saw a loon on this pond. Saw fresh moose tracks along the way to Little Indian Lake. Got there at 8am, although I moved some road debris along the way. I hate having to stop on the way out on some descents. Right outside the campground there was a loon calling as I walked out into the open, but no chicks, just a single loon. I canoed all over the lake looking for nesting sites as I hadn’t been there this year but couldn’t find any. 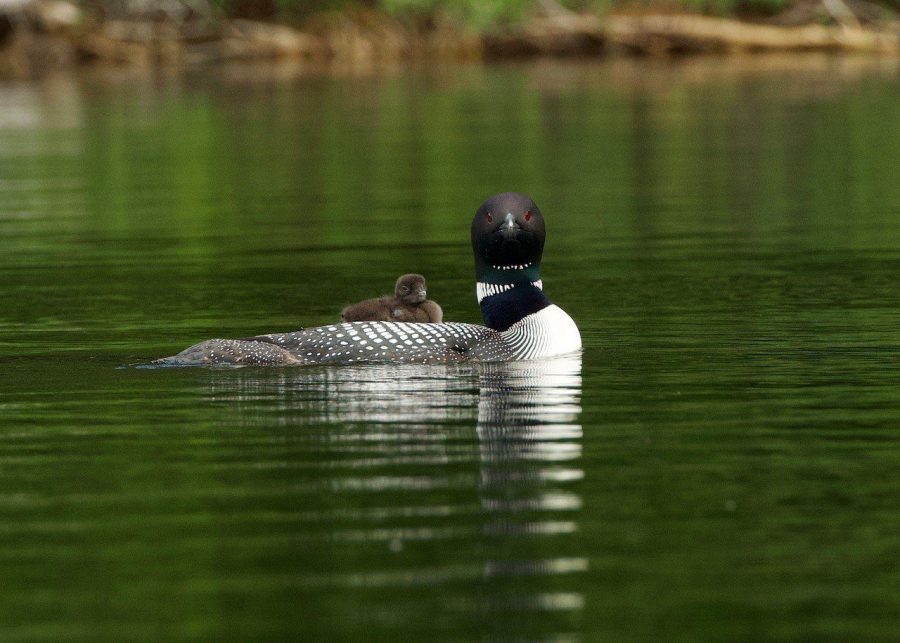 I had a Ringnecked Duck with five babies and a few songbirds with food for the young including White-throated Sparrow, Song Sparrow, Common Yellowthroat, Yellow-bellied Woodpecker and Kingfisher at belt. There were Cedar Waxwings bugged around the shore as there was a green drake hatch sticking out of the water. I cycled back on the old trail to Squaw Lake and headed to Ledge Rock Point where you can see most of the lake.

My dad’s ashes are there, so we had a little visit and caught up on some stuff. I had to tell him about the new great-grandchild Milly who he missed. We had some great days fishing right off this rocky ledge we visit every year. This year there was a loon just off the ledge who said nothing as he swam to the west end of the lake and encountered another loon followed by a chick. I watched them fishing together for a while under the tall dead pine with an Osprey nest on top, which also had a young bird in the nest. All kinds of excitement, because those loons hadn’t had a chick in three years on the lake.

Back up to the bike and to the truck where I had lunch, some granola bars and an apple. Drive to the Beaver Lake trailhead, then bike the two miles into the lake. Passed four hikers and two dogs near the tall pine. I asked if they had seen any loons on the lake and they said they had been there about an hour and hadn’t seen or heard anything. I arrived around 1pm and saw a loon fishing in the lily pads at the west end. Looking further I could see a loon on the nest in a bog on the far western side of the lake. I sat on the shore and watched for a while as the bird on the nest descend and cool off in the lake and return to the nest, which ended my loon count day.

I can bike out of Beaver Lake in less than 15 minutes if I don’t stop to admire the dying triple white pine. I sure hope it doesn’t fall on the trail, because we don’t have saws big enough to cut it. Two other large pines fell just down the trail a year before I arrived here in 1966, and luckily they fell parallel to the trail.

Wild parsnip is taking over shoulders and even fields on the way to Utica, but that’s another story. See you.