Bob Stanley has worked as a music journalist, DJ and label owner, and is the co-founder and keyboardist of the band Saint Etienne. He is the author of Yeah! Yeah! Yeah ! : The history of pop music, from Bill Haley to Beyoncéand is more recently the author of Let’s Do It: The Birth of Pop Music: A History, just published by Pegasus Books

Ragtime’s rise to national and then international prominence took an entire decade. The first decade of the American century saw the creation and rapid rise of the music industry, which, once in place, both made ragtime a phenomenon and shattered the morale of its innovators. Recorded music had to be marketed and sold, and songs had to be written to be recorded. Lower Manhattan was not lacking in a “can do” spirit.

In the 1900s, dozens of would-be writers saw Charles K. Harris rolling in “After the Ball” dollars and, hoping that lightning would strike Lower Manhattan again, they bought themselves a small office on West 28th Street, between Broadway and Sixth Ave. It became a maze of songwriters’ offices that was soon dubbed “Tin Pan Alley” because of the noise coming from several smashed pianos, not to mention wastebaskets – filled with discarded songs – being kicked around of frustration.[i]

Art and commerce were interchangeable on Tin Pan Alley. “Meet Me in St Louis” was written as an advertisement for the Louisiana Purchase Exposition, otherwise known as the St Louis World’s Fair, in 1904; it would become a hit again in 1944 as the theme of one of Judy Garland’s best-loved films. The very soul of Cockney London, Florrie Forde’s “Down at the Old Bull and Bush” (1903) was in fact of American origin: “Here’s the little German band, just let me hold your hand” was a lyrical clue. It had been written by Harry Von Tilzer, whose real name was Harry Gumm; his mother’s maiden name was Tilzer, and he added “Von” for a bit of Tin Pan Alley class. The song was an advertisement for Budweiser, brewed by Anheuser-Busch – you can imagine the original jingle. Von Tilzer also gave us the boisterous gaiety of “Wait ‘Til the Sun Shines, Nellie”, first recorded in 1905 by minstrel singer Byron G. Harlan, and fifty years later by Buddy Holly.

America’s biggest hits of the day, emanating from the Alley — still untouched by Missouri ragtime — were largely teary stuff. The sentimental “In the Shade of the Old Apple Tree”, written by an Egbert Van Alstyne, was recorded directly by the Peerless Quartet and Henry Burr in 1904, but was so sappy that it was almost immediately parodied, almost as savory , by Billy Murray (“I climbed the old apple tree, because a pie was the real thing for me”). Even more stunning was 1906’s “My Gal Sal”, a final fanfare from Paul Dresser, the author of “On the Banks of the Wabash”, who cried every time he sang one of his own songs.

The portly Dresser, in his cups, was legendaryly generous — to his author brother Theodore Dreiser, to New York’s homeless people — and gave away all of his songwriting royalties. He died in 1907, aged forty-eight, and thus never lived to see himself played on screen by Victor Mature – in the 1942 biopic My Gal Sal – nor to rejoice in the fact that his on-screen character would frolic with Rita Hayworth (the film remains one of the most comprehensive rewrites in Hollywood history – half of the songs in the film were written by Leo Robin rather than by Dresser).

The biggest local name, the most famous American composer of the decade, was not American at all. Victor Herbert was born in Dublin in 1859 and moved to the United States in the early 1890s; in 1898 he had his first operetta on Broadway, The Fortune Teller, featuring “Gypsy Jan”, “Romany Life” and “Slumber On, My Little Gypsy Sweetheart” – revealing tracks that revealed her Viennese inspiration. New York has remained largely immune to the charms of American music. What he needed was a little pride, self-mythification, and the person to do that was a smug-looking man in a straw boater named George M. Cohan.

Cohan became the undisputed first king of Broadway with a batch of songs he wrote in his mid-twenties, between 1904 and 1906, and a two-pronged attack that set his work apart from Herbert’s light operas and ballads. locals like the Haydn Quartet. 1905 recording “In the Shade of the Old Apple Tree”. First, he was strongly patriotic – he was all about the New World. Second, he mythologized Broadway as a place of glamor (“Give My Regards to Broadway”). No hokum on apple trees; it was all city feelings and love for the new century. Cohan was born on July 4, 1878, which earned him a certain amount of loudmouth jingoism; in 1904 he wrote the most patriotic pop song of the lot, “Yankee Doodle Dandy”. He reacted to criticism of his work with a “As long as they mention my name”. On what lines did he write his plays, asked one critic. “Primarily on the New York, New Haven and Hartford line.” He’s visibly modern and even has a statue in Times Square, so why isn’t Cohan’s name remembered better? Well, he damaged his legacy by singing his own songs, which wasn’t a good idea, given his inability to stay in tune. Still, it’s entertaining listening today: 1911’s “Life’s a Very Funny Proposition” suggests Bob Dylan’s strange rising and falling cadence, only sung in a half-Scottish, half-French accent. 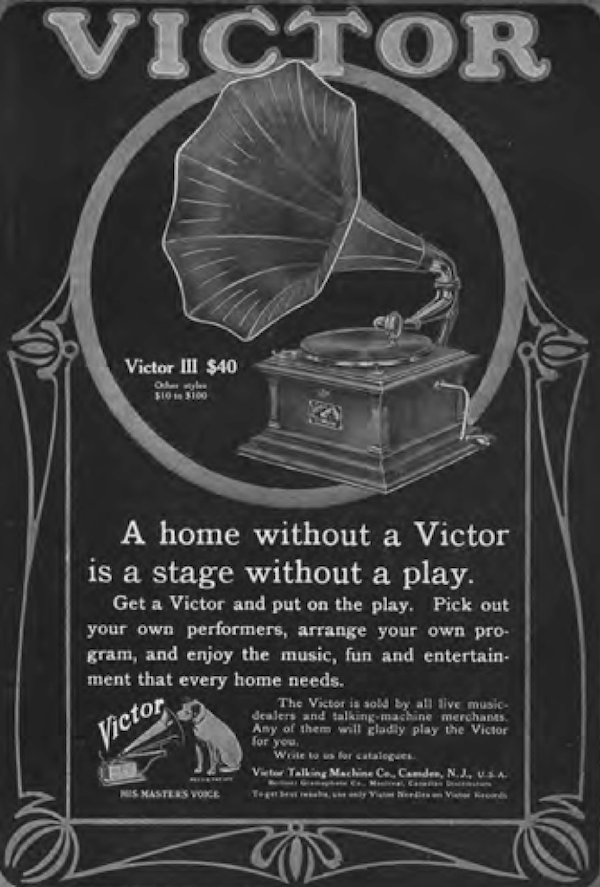 While American songwriters like George M. Cohan began creating American theatrical music without any debt to Vienna or Gilbert and Sullivan, and Will Marion Harris brought ragtime rhythms to Broadway with his 1903 show. In Dahomey, the gramophone was therefore reinvented for the dawning American era in the form of the Victrola. Thomas Edison himself had thought that any use of the gramophone beyond dictation was a novelty, and he was right: it recorded the human voice much better than the violin; for any other use, it was a squeaky mechanical toy. talking machine world was under no illusions and wrote that “the intellectual element claimed to find no merit in the talking machine”. The piano, on the other hand, continued to be a source of spiritual help beyond the Victorian era. the skill of Eldridge Johnson of the Victor Talking Machine Company to make the gramophone an equally acceptable and desirable piece of home furniture in Edwardian times.

Johnson invented several things that any 21st century record collector or vinyl obsessive would know today: a straight tone arm, a recess in the middle of the record that you can place a paper label on, and a box under the turntable. in which all the mechanical parts were neatly contained. It was his new record player, and in 1906 it was marketed as the Victrola. It came in a four-foot-tall mahogany cabinet; Edison’s machines looked like industrial lathes in comparison. Soon President Taft had a Victrola in the White House, and Johnson exploited this news for all it was worth, using photos of Taft in his business literature.

[i] The first music publisher to settle in the neighborhood was the famous Mr. Witmark and Sons – Isidore, Julius and Jay – who moved downtown from 14th Street to 49-51 West 28th Street in 1893. D others quickly closed in: Paul Dresser and Harry von Tilzer of Indiana; and Charles K. Harris of Milwaukee, who had written the schmaltzy but wildly successful “After the Ball” in 1893. By 1900, West 28th Street had the greatest concentration of popular music publishers in the United States. Chance and a few hundred dollars could secure you an office. Tin Pan Alley quickly became so successful in publishing and distributing sheet music that publishers in other American cities were marginalized.

Excerpt from chapter 3 of Let’s Do It: The Birth of Pop Music: A History, courtesy of Pegasus Books.